Everyone had a favourite cuddly when they were a tinker. Don’t attempt to deny it you soulless goon! The typical teddy bear (or close alternative) was way better than an invisible friend – mostly because they actually existed and didn’t talk back – and were much easier to take to bed and snuggle up to than the stabbing plastic of the Millennium Falcon. My own personal bear was actually a dog cuddly with big floppy ears, which had a top layer of fur you could unzip and remove to reveal a garish pink and black horizontal striped pyjama number underneath. Despite his colour-blindness and piss-poor taste in bed-wear, he was an exceptional listener (teddy bears have to be when you’re a highly demanding attention-seeking niblet) and pretty much went everywhere with me. I can’t remember that damn dog’s name for shit (‘Poppy’ suggested my hippocampus a minute ago – which can’t possibly be true seeing as I’m a gruff man, RAHR!) but just like all of you and your own bear of choice, he was my buddy, my snugly and, most importantly, my protector.
Yes, protector. It’s amazing how, as grown-ups, we quickly forget about all the freaking monsters under the bed, the jism monkeys in the closet and the skunk pussies hanging around outside the bedroom window waiting to pounce on the easily terrified child. When our irritable little ones are having the night terrors or the nap-time creeps we like to think we’re saving the day once we enter their bedroom to give them a big hug; but the truth is bear has already skull fucked the dribbling snot-creature that was looking to feast on the tinker’s soul whilst we were all busy watching The Only Way Is Essex. Don’t deny it. You love The Only Way Is Essex! With his protector job done, bear simply returns to his role of snugly, waiting for the next foul beast to attempt to encroach on his best friend’s room. Mostly so he can knee-cap the muddy-funster…
And for this he gets no gratitude from the ignorant parents (except when it’s plainly obvious that an unstitched arm or a loose eye from the previous nights near death encounter at the hands of an incredibly powerful Wixard requires Mum’s handy needlework skills). He needs not that. The warm hug of his padawan everyday, for the short-time he is required (before being put in storage), is enough to justify any and all night time heroics. My boy has had his own little blue bear now for a fair while, and he loves that bear to bits. I’m sure the feeling is mutual for bear (but he refuses to speak to me – git). So, if any monsters are out there reading, little blue is waiting for you to try it on. Just don’t be surprised when he punches you in the kidney, knees you in the nuts and gouges out your eyes with a knitting needle in protecting all that is dear to him. Teddy bears rock. You have been warned! 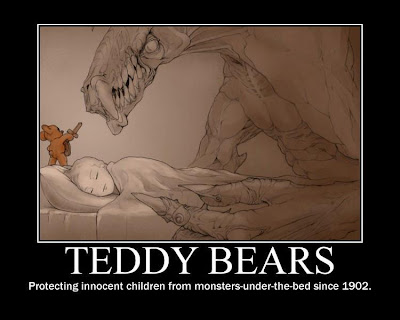 There’s a film in that picture somewhere. Perhaps we could call it Toy Story or Monsters Inc? Sort it out Pixar!

Wonderful pic! My Teddy was indeed my cat... Puss was a scary bitch, she would keep spiders off my bed (except for the ones that were crushed at the bottom of the bed under the covers :@ - I had an attic bedroom!!)

She would kick any teddy bears off the bed and I would often find teeth marks in them. In addition to her normal meal time requirements I would 'feed' her pet gerbils and cadbury flake crumbs from the packet..

My reward for too much fussing was that she would warn me with a flick of her tail that she was annoyed...I would have approx 2.3 seconds to back off or be branded with her tri-banded raised tattoo that would fade after much bleeding and swabbing with cotton wool in a few days.

I really should have had a Winnie the Pooh or Paddington, but Puss would never allow me to place my faith in a miniature Jagarbar - nope a wovewy puddy tat to keep my monsters away....she died of old age and stubborness three years before I met Luke....funny that!

Puss sounds like a legendary monster killer. I presume Odin is providing the same duty for Issy and Charlie?

I just came on this, after looking up some information on my childhood best friend. Teddy, because well that was the name upon his box, has been through over thirty years of trials and tribulations. The irony, my father purchased him for me when I went into the hospital when I was six. He saved me from the evils of the mad doctors and terrible sore throats.
Other little girls had Mandy dolls , I had Teddy. Other kids had Cabbage patch dolls, but well me and Teddy stuck through the transformations. I can remember on many of occasions he was the one that I clung to through that delightful period of teenage agnst.
I hope my daughter now that she's getting older will do the same her own bear and when she's forty years old find him tucked away in a box and be able to sit down and cry again with the beloved best friend that no matter what .. has been there. Best part? Those tears are for being so damned happy you found him to begin with that the rest of the worlds problems? They just don't count anymore, Teddy's there and all the bad stuff .. stress , bills, work.. its all getting its perverbal ass kicked by Teddy.