On the 7 October I completed the Royal Park’s Half Marathon. Go me. And not just completed it; I smashed my personal best at this distance by three minutes. Which is not bad considering I’m four years older since my last half-marathon, trained less owing to work commitments and fatherhood responsibilities and drunk more beer during training than the previous time round. So, proof positive that beer contains magical properties beyond helping ugly people have sex since 1964.

Luckily, the mantras from semi-professional football managers of old constantly sounded encouragement between my ears during the run – “you’re only cheating yourself” I would constantly remind myself. And it seemingly worked. After a comfortable 10k (six miles) which whizzed by the last seven miles were painful and agonising. It didn’t help that the sun was shining brightly and there was nowhere to hide on the large expanse of Hyde Park that the last seven miles zig-zagged across. At one point, diving into the Serpentine appeared to be a refreshing idea given the lack of a comforting rain storm. But despite the nagging pain in the calves, the mantra kept me going, kept me ahead of the hour and fifty minute pacemaker and ensured I crossed the finishing line in one hour 45 minutes and 57 seconds. 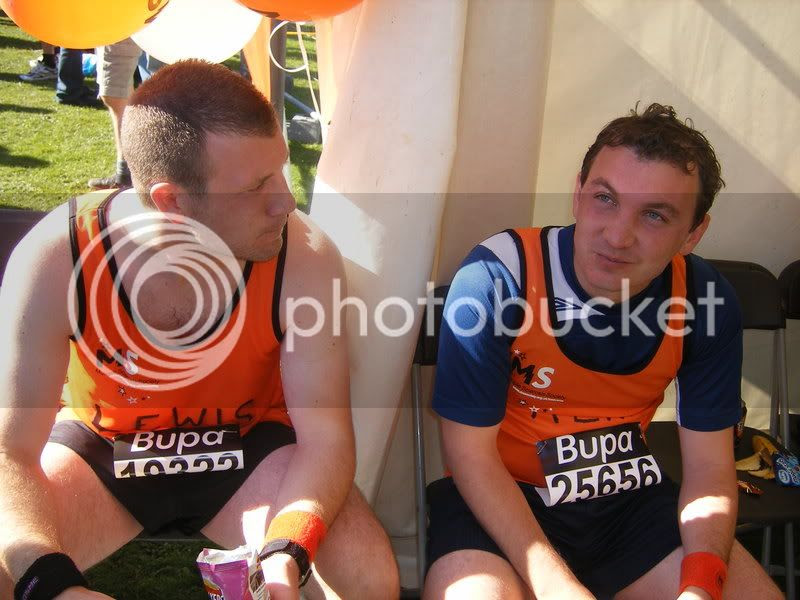 Of course, the other thing that kept me going was that I was raising money and awareness for the MS Society, as well as running in the memory of my Mum who suffered with the progressive form of the illness for 29 years. Given that I watched her slowly fall apart until there was nothing else left to fall off, stopping for a breather or even contemplating walking (unless I picked up an injury) would have been particularly poor form. Hopefully she would have been proud, especially the £700 currently raised by me and Callum (my co-runner who’s knee went wonky at the 10 mile mark but managed to finish despite the injury – good work bud). I’d like this to be a little more than at present so if you’re feeling generous and have not already done so, the justgiving webpage will remain up until the beginning of January. It’s for a very good cause and if everyone I knew just gave a quid, then the MS Society would have a shitload of quids:

Anyway, enough of this running madness! I’ve got sitting on my arse to do and games to play. Although I am starting to become fond of the washer-board six-pack that is starting to poke through the barrel; and the fact that I’m no longer out of breath after climbing stairs. I’m not doing a fucking marathon though. That’s crazy talk for crazy people…!

Marathon? Even Dawson thinks that is a crazy idea...

Great article, exactly what I needed.

Feel free to surf to my website: buy soundcloud plays

Bitcoin also has the advantage of being used on an international level.
These coins are divided into small pieces known as satoshi and again broken down into hundreds.
" Bitcoins are making their way in to the accepted payment forms of some pretty large retailers. For example, the effect of a solar flare on the complex software that manages the communication satellite systems could be derived very quickly.

Have a look at my blog my free bitcoins
methods

Hello my friend! I want to say that this post is amazing, great written and include almost
all vital infos. I would like to peer more posts like this .

I was suggested this web site by my cousin. I'm not sure whether this post is
written by him as no one else know such detailed about my difficulty.
You're wonderful! Thanks!